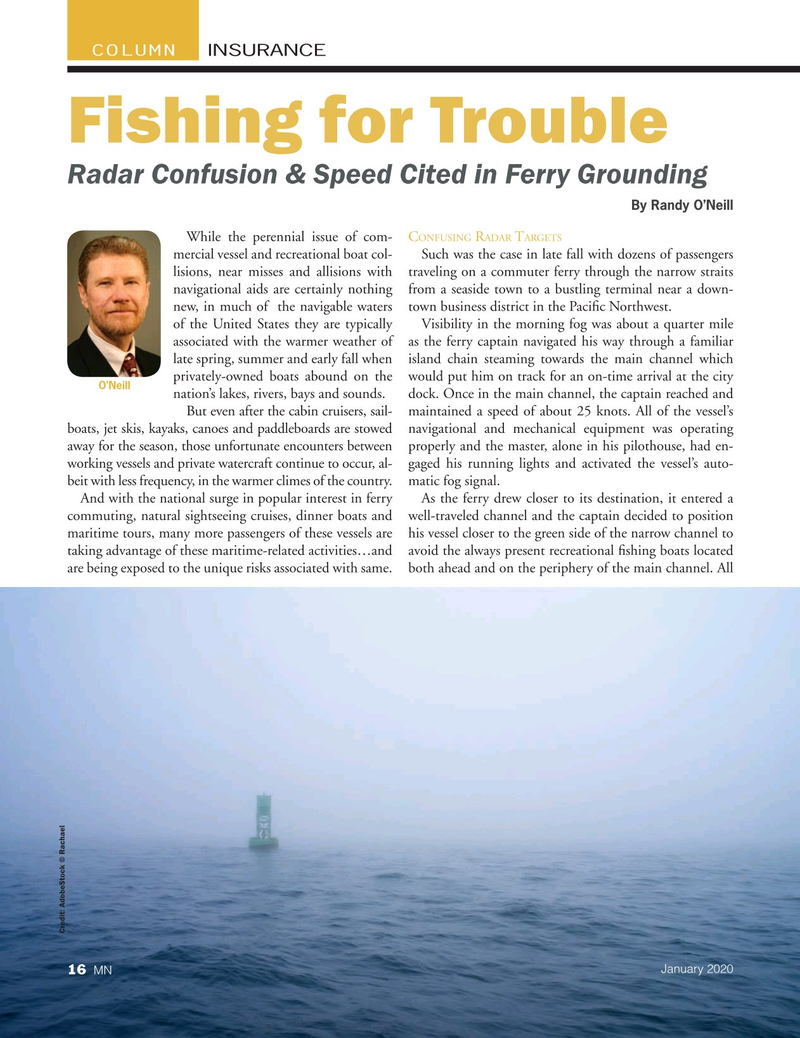 While the perennial issue of com- C R TONFUSING ADAR ARGETS mercial vessel and recreational boat col- Such was the case in late fall with dozens of passengers lisions, near misses and allisions with traveling on a commuter ferry through the narrow straits navigational aids are certainly nothing from a seaside town to a bustling terminal near a down- new, in much of the navigable waters town business district in the Paci? c Northwest.

of the United States they are typically Visibility in the morning fog was about a quarter mile associated with the warmer weather of as the ferry captain navigated his way through a familiar late spring, summer and early fall when island chain steaming towards the main channel which privately-owned boats abound on the would put him on track for an on-time arrival at the city

O’Neill nation’s lakes, rivers, bays and sounds. dock. Once in the main channel, the captain reached and

But even after the cabin cruisers, sail- maintained a speed of about 25 knots. All of the vessel’s boats, jet skis, kayaks, canoes and paddleboards are stowed navigational and mechanical equipment was operating away for the season, those unfortunate encounters between properly and the master, alone in his pilothouse, had en- working vessels and private watercraft continue to occur, al- gaged his running lights and activated the vessel’s auto- beit with less frequency, in the warmer climes of the country. matic fog signal.

And with the national surge in popular interest in ferry As the ferry drew closer to its destination, it entered a commuting, natural sightseeing cruises, dinner boats and well-traveled channel and the captain decided to position maritime tours, many more passengers of these vessels are his vessel closer to the green side of the narrow channel to taking advantage of these maritime-related activities…and avoid the always present recreational ? shing boats located are being exposed to the unique risks associated with same. both ahead and on the periphery of the main channel. All

Marine News is the premier magazine of the North American Inland, coastal and Offshore workboat markets.